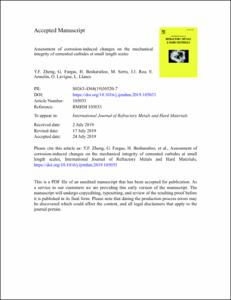 Except where otherwise noted, content on this work is licensed under a Creative Commons license : Attribution-NonCommercial-NoDerivs 3.0 Spain
Abstract
In this work, the effect of corrosion-induced damage on the mechanical response of hardmetals was evaluated at small length-scale by means of nanoindentation and nanoscratch techniques. Damage was introduced in a controlled way through immersion of samples in acidic solution. It was found that surface degradation associated with corrosion leads to strong reduction of elastic modulus and hardness, as compared to non-corroded samples. Similarly, significant differences were observed in nanoscratch response, regarding not only the width and depth of tracks but also the deformation mechanisms developed as contact load is progressively increased. Damage emergence and evolution were evidenced in corroded surfaces at scratching loads significantly lower than for non-corroded specimens. Changes in nanoindentation and nanoscratch response and damage scenario are discussed on the basis of the effective microstructural assemblage remnant after corrosion action. In this regard, dissolution of metallic phase becomes critical as it yields as a result a mechanically unsupported, contiguous and binderless/porous, carbide network. Consequently, cracking, fragmentation and easy removal of WC grains under contact loading is evidenced; and thus, mechanical integrity is effectively lessened.
CitationZheng, Y. [et al.]. Assessment of corrosion-induced changes on the mechanical integrity of cemented carbides at small length scales. "International journal of refractory metals and hard materials", 1 Novembre 2019, vol. 84, p. 105033:1-105033:8.
URIhttp://hdl.handle.net/2117/177589
DOI10.1016/j.ijrmhm.2019.105033
ISSN0263-4368
Publisher versionhttps://www.sciencedirect.com/science/article/abs/pii/S0263436819305207
Collections
Share: