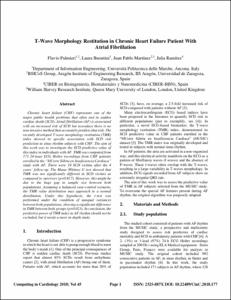 Chronic heart failure (CHF) represents one of the major public health problems that often end in sudden cardiac death (SCD). Atrial fibrillation (AF) is associated withan increased risk of SCD but nowadays there is no non-invasive method that accurately predicts that risk. The recently developed T-wave morphology restitution (TMR) index showed its specific association with SCD risk prediction in sinus rhythm subjects with CHF. The aim of this work was to investigate the SCD predictive value of this index in individuals with AF. TMR was computed from 171 24-hour ECG Holter recordings from CHF patients enrolled in the “MUerte Súbita en Insuficiencia Cardiaca”study with AF. There were 19 SCD victims after the 4 years’follow-up. The Mann–Whitney U test showed that TMR was not significantly different in SCD victims as compared to survivors (p=0.617). However, this might be due to the huge gap in sample size betweenbothpopulations. Assuming a balanced case-control scenario, the TMR value distribution mayapproach to a normal distribution. Under this hypothesis, the t-test was performed under the condition of unequal variances between both populations, showinga significant difference in TMR between bothgroups (p=0.023). In conclusion, the predictive power of TMR index in AF rhythm should not be excluded, but it needs a more in-depth study
CitationPalmieri, F. [et al.]. T-wave morphology restitution in chronic heart failure patient with atrial fibrillation. A: Computing in Cardiology. "Computing in Cardiology, September 23-26, 2018, Maastricht, the Netherlands". Institute of Electrical and Electronics Engineers (IEEE), 2018, p. 1-4.
URIhttp://hdl.handle.net/2117/177546
DOI10.22489/CinC.2018.177
ISBN978-1-7281-0958-9
Other identifiershttp://www.cinc.org/archives/2018/pdf/CinC2018-177.pdf