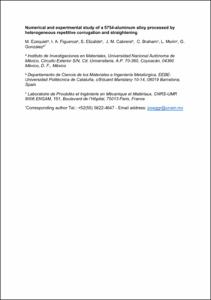 Except where otherwise noted, content on this work is licensed under a Creative Commons license : Attribution-NonCommercial-NoDerivs 3.0 Spain
Abstract
Repetitive corrugation and straightening (RCS) is a process that induces cyclic plastic deformation on sheet geometries, reporting promising improvements in mechanical properties in metals and alloys. Alternative die geometries, as well as the effect of the process over strain-hardenable alloys, have not been widely studied. In this work, sheets of the aluminum 5754 alloy were processed by RCS, using a novel die design to induce heterogeneous repetitive plastic deformation at room temperature. Numerical 3D Finite Element Analysis (FEA) was performed using the new die; the changes in the homogeneity of deformation, ductility and mechanical strength due to the process were studied. The processed samples were mechanically characterized by means of microhardness and tensile tests. Global and local XRD peak broadening were measured for determining the microstrain evolution during the process. After the initial heterogeneous RCS pass, a decrement in ductility was observed, but the increase in yield strength was significant. The microhardness mapping showed a heterogeneous distribution of the deformation with good agreement with the numerical simulation. XRD peaks width enlarged with the heterogeneous RCS passes in concordance with the mechanical results
CitationEzequiel, M. [et al.]. Numerical and experimental study of a 5754-aluminum alloy processed by heterogeneous repetitive corrugation and straightening. "Journal of materials research and technology", 1 Gener 2019.
URIhttp://hdl.handle.net/2117/177542
DOI10.1016/j.jmrt.2019.12.026
ISSN2238-7854
Publisher versionhttps://www.sciencedirect.com/science/article/pii/S2238785419312396
Collections
Share: