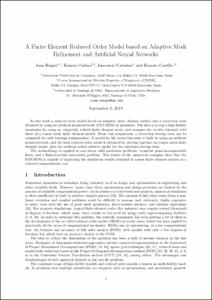 Castillo, Ernesto
Document typeArticle
PublisherJohn Wiley & sons
Rights accessOpen Access
Abstract
In this work, a reduced-order model based on adaptive finite element meshes and a correction term obtained by using an artificial neural network (FAN-ROM) is presented. The idea is to run a high-fidelity simulation by using an adaptively refined finite element mesh and compare the results obtained with those of a coarse mesh finite element model. From this comparison, a correction forcing term can be computed for each training configuration. A model for the correction term is built by using an artificial neural network, and the final reduced-order model is obtained by putting together the coarse mesh finite element model, plus the artificial neural network model for the correction forcing term. The methodology is applied to nonlinear solid mechanics problems, transient quasi-incompressible flows, and a fluid-structure interaction problem. The results of the numerical examples show that the FAN-ROM is capable of improving the simulation results obtained in coarse finite element meshes at a reduced computational cost.
Description
This is the accepted version of the following article: [ Baiges, J, Codina, R, Castañar, I, Castillo, E. A finite element reduced‐order model based on adaptive mesh refinement and artificial neural networks. Int J Numer Methods Eng. 2020; 121: 588– 601. https://doi.org/10.1002/nme.6235], which has been published in final form at https://onlinelibrary.wiley.com/doi/abs/10.1002/nme.6235.
CitationBaiges, J. [et al.]. A finite element reduced-order model based on adaptive mesh refinement and artificial neural networks. "International journal for numerical methods in engineering", Febrer 2020, vol. 121, núm. 4, p. 588-601.
URIhttp://hdl.handle.net/2117/177510
DOI10.1002/nme.6235
ISSN0029-5981
Publisher versionhttps://onlinelibrary.wiley.com/doi/abs/10.1002/nme.6235
Other identifiershttps://www.researchgate.net/publication/335802770_A_Finite_Element_Reduced_Order_Model_based_on_Adaptive_Mesh_Refinement_and_Artificial_Neural_Networks
Collections
Share: