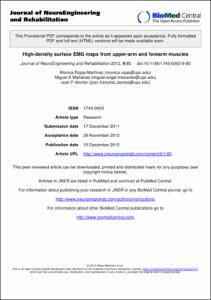 Except where otherwise noted, content on this work is licensed under a Creative Commons license : Attribution-NonCommercial-NoDerivs 3.0 Spain
Abstract
Background sEMG signal has been widely used in different applications in kinesiology and rehabilitation as well as in the control of human-machine interfaces. In general, the signals are recorded with bipolar electrodes located in different muscles. However, such configuration may disregard some aspects of the spatial distribution of the potentials like location of innervation zones and the manifestation of inhomogineties in the control of the muscular fibers. On the other hand, the spatial distribution of motor unit action potentials has recently been assessed with activation maps obtained from High Density EMG signals (HD-EMG), these lasts recorded with arrays of closely spaced electrodes. The main objective of this work is to analyze patterns in the activation maps, associating them with four movement directions at the elbow joint and with different strengths of those tasks. Although the activation pattern can be assessed with bipolar electrodes, HD-EMG maps could enable the extraction of features that depend on the spatial distribution of the potentials and on the load-sharing between muscles, in order to have a better differentiation between tasks and effort levels. Methods An experimental protocol consisting of isometric contractions at three levels of effort during flexion, extension, supination and pronation at the elbow joint was designed and HD-EMG signals were recorded with 2D electrode arrays on different upper-limb muscles. Techniques for the identification and interpolation of artifacts are explained, as well as a method for the segmentation of the activation areas. In addition, variables related to the intensity and spatial distribution of the maps were obtained, as well as variables associated to signal power of traditional single bipolar recordings. Finally, statistical tests were applied in order to assess differences between information extracted from single bipolar signals or from HD-EMG maps and to analyze differences due to type of task and effort level. Results Significant differences were observed between EMG signal power obtained from single bipolar configuration and HD-EMG and better results regarding the identification of tasks and effort levels were obtained with the latter. Additionally, average maps for a population of 12 subjects were obtained and differences in the co-activation pattern of muscles were found not only from variables related to the intensity of the maps but also to their spatial distribution. Conclusions Intensity and spatial distribution of HD-EMG maps could be useful in applications where the identification of movement intention and its strength is needed, for example in robotic-aided therapies or for devices like powered- prostheses or orthoses. Finally, additional data transformations or other features are necessary in order to improve the performance of tasks identification.
CitationRojas, M.; Mañanas, M.; Alonso, J. High-density surface EMG maps from upper-arm and forearm muscles. "Journal of neuroengineering and rehabilitation", Desembre 2012, vol. 9, núm. 85.
URIhttp://hdl.handle.net/2117/17746
DOI10.1186/1743-0003-9-85
ISSN1743-0003
Collections
Share: