Noise radiated by an open cavity at low Mach number: Effect of the cavity oscillation mode 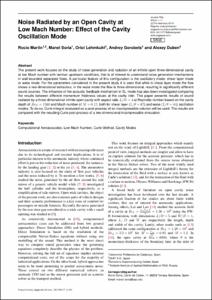 Duben, Alexey
Gorobets, Andrey
Document typeArticle
Rights accessOpen Access
Abstract
The present work focuses on the study of noise generation and radiation of an infinite open three-dimensional cavity at low Mach number with laminar upstream conditions that is of interest to understand noise generation mechanisms in wall-bounded separated flows. A particular feature of this configuration is the oscillatory mode: shear layer mode or wake mode. For the parameters considered in the present study it is seen that while in shear layer mode the flow shows a two-dimensional behavior, in the wake mode the flow is three-dimensional, resulting in significantly different sound sources. The influence of the acoustic feedback mechanism in the shear layer mode has also been investigated comparing the results between different momentum thickness values at the cavity inlet. This paper presents results of sound radiated by a three-dimensional infinite open cavity with aspect ratio L/D = 4 at Reynolds number based on the cavity depth of ReD = 1500 and Mach number of M = 0.15, both for shear layer (L/θ = 67) and wake (L/θ = 84) oscillation modes. To do so, Curle integral evaluated as a post-process of an incompressible solution will be used. The results are compared with the resulting Curle post-process of a two-dimensional incompressible simulation
CitationMartín, R. [et al.]. Noise radiated by an open cavity at low Mach number: Effect of the cavity oscillation mode. "International Journal of Aeroacoustics", 17 Setembre 2019, vol. 18, núm. 6-7, p. 647-668.
URIhttp://hdl.handle.net/2117/177289
DOI10.1177/1475472X19871534
ISSN1475-472X
Publisher versionhttps://journals.sagepub.com/doi/10.1177/1475472X19871534
Collections
Share: