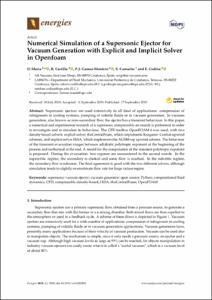 Document typeArticle
Rights accessOpen Access
Abstract
Supersonic ejectors are used extensively in all kind of applications: compression of refrigerants in cooling systems, pumping of volatile fluids or in vacuum generation. In vacuum generation, also known as zero-secondary flow, the ejector has a transient behaviour. In this paper, a numerical and experimental research of a supersonic compressible air nozzle is performed in order to investigate and to simulate its behaviour. The CFD toolbox OpenFOAM 6 was used, with two density-based solvers: explicit solver rhoCentralFoam, which implements Kurganov Central-upwind schemes, and implicit solver HiSA, which implements the AUSM+up upwind scheme. The behaviour of the transient evacuation ranges between adiabatic polytropic exponent at the beginning of the process and isothermal at the end. A model for the computation of the transient polytropic exponent is proposed. During the evacuation, two regimes are encountered in the second nozzle. In the supercritic regime, the secondary is choked and sonic flow is reached. In the subcritic regime, the secondary flow is subsonic. The final agreement is good with the two different solvers, although simulation tends to slightly overestimate flow rate for large values region.
CitationMacià, L. [et al.]. Numerical simulation of a supersonic ejector for vacuum generation with explicit and implicit solver in openfoam. "Energies", 17 Setembre 2019, vol. 12, núm. 18, p. 3553:1-3553:17.
URIhttp://hdl.handle.net/2117/177261
DOI10.3390/en12183553
ISSN1996-1073
Publisher versionhttps://www.mdpi.com/1996-1073/12/18/3553
Collections
Share: