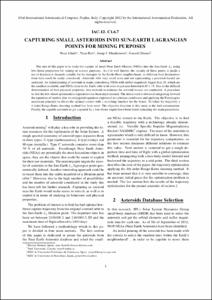 Gomez Muntaner, Gerard
Document typeConference report
Rights accessOpen Access
Abstract
The aim of this paper is to study the capture of small Near Earth Objects (NEOs) into the Sun-Earth L2 using low-thrust propulsion for mining or science purposes. As it is well known, the vicinity of these points is inside a net of dynamical channels suitable for the transport in the Earth-Moon neighborhood, so different final destinations from here could be easily considered. Asteroids with very small mass and not representing a potential hazard are analyzed. An initial pruning of asteroids is made, considering NEOs with stellar magnitude bigger than 28, which are the smallest available, and NEOs close to the Earth orbit with semi-major axis between 0.85-1.15. Due to the difficult determination of their physical properties, two methods to estimate the asteroid masses are conducted. A procedure to find the low-thrust optimization trajectories has been implemented. The initial seed is obtained integrating forward the equations of motion plus its conjugated equations expressed in cartesian coordinates and applying the Pontryagins maximum principle to obtain the optimal control with a switching function for the thrust. To refine the trajectory a 4 order Runge-Kutta shooting method has been used. The objective function in this study is the fuel consumption. Finally, the capable asteroids to get captured by a low-thrust engine have been listed indicating the main parameters.
CitationLladó, Neus [et al.]. Capturing small asteroids into Sun-Earth Lagrangian points for mining purposes. A: International Astronautical Congress. "63rd International Astronautical Congress". Naples: 2012, p. 1-10.
URIhttp://hdl.handle.net/2117/17714
ISBN1995-6258
Collections
Share: