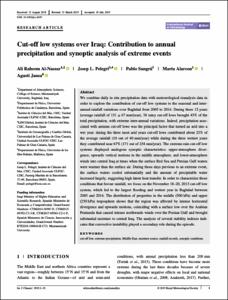 Jansà Clar, Agustí
Document typeArticle
PublisherWiley
Rights accessOpen Access
Abstract
We combine daily in situ precipitation data with meteorological reanalysis data in order to explore the contribution of cut-off low systems to the seasonal and interannual rainfall variations over Baghdad from 2005 to 2016. During these 12 years (average rainfall of 131 ± 67 mm/year), 38 rainy cut-off lows brought 43% of the total precipitation, with extreme inter-annual variations. Indeed, precipitation associated with autumn cut-off lows was the principal factor that turned an arid into a wet year: during the three most arid years cut-off lows contributed about 25% of the average rainfall (10 out of 40 mm/year) while during the three wettest years they contributed near 67% (171 out of 254 mm/year). The extreme-rain cut-off low systems displayed analogous synoptic characteristics: upper-atmosphere divergence, upwards vertical motions in the middle atmosphere, and lower-atmosphere winds into central Iraq at times when the surface Red Sea and Persian Gulf waters were warmer than the surface air. During those days previous to an extreme event, the surface waters cooled substantially and the amount of precipitable water increased largely, suggesting high latent heat transfer. In order to characterize those conditions that favour rainfall, we focus on the November 18–20, 2013 cut-off low system, which led to the largest flooding and wettest year in Baghdad between 2005 and 2016. The distribution of properties in the middle (500 hPa) and upper (250 hPa) troposphere shows that the region was affected by intense horizontal divergence and upwards motions, coinciding with a surface low over the Arabian Peninsula that caused intense northwards winds over the Persian Gulf and brought substantial moisture to central Iraq. The analysis of several stability indexes indicates that convective instability played a secondary role during the episode.
Location
1: Governació d'Al-Anbar, Iraq
CitationAl-Nassar , A. [et al.]. Cut-off low systems over Iraq: Contribution to annual precipitation and synoptic analysis of extreme events. "International journal of climatology", 1 Gener 2019, vol. 40, núm. 2, p. 908-926.
URIhttp://hdl.handle.net/2117/177114
DOI10.1002/joc.6247
ISSN0899-8418
Publisher versionhttps://rmets.onlinelibrary.wiley.com/doi/abs/10.1002/joc.6247
Collections
Share: