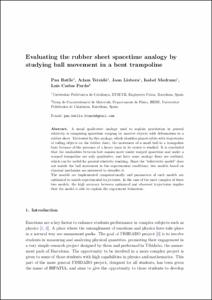 Except where otherwise noted, content on this work is licensed under a Creative Commons license : Attribution-NonCommercial-NoDerivs 3.0 Spain
Abstract
Fisidabo is an educational project aimed at promoting critical thinking among students. Under the framework of this project, and motivated by the ubiquitous qualitative analogy between spacetime warping by massive objects and the deformation of a rubber sheet to explain general relativity, a group of engineering physics students have undertaken a study of the movement of a small ball on a trampoline bent by the presence of a heavy mass in its centre. As the literature states, similarities between how masses move under warped spacetime and under a bent trampoline are only qualitative. Some observed analogy flaws are described which can be useful for teaching general relativity. Triggered by the failure of this analogy, a complete study of the movement of particles in a bent rubber sheet is developed. Several models to describe such trajectories and the resulting shape of the trampoline are proposed. Most importantly, a fitting routine to obtain the parameters needed for the description of the real trajectory is presented. The high accuracy between optimised and real trajectories recorded by a video camera implies that the model is able to explain the experimental behaviour.
CitationBatlle, P. [et al.]. Exploring the rubber sheet spacetime analogy by studying ball movement in a bent trampoline. "European journal of physics", 21 Juny 2019, vol. 40, núm. 4, p. 045005:1-045005:32.
URIhttp://hdl.handle.net/2117/176999
DOI10.1088/1361-6404/ab1a5c
ISSN0143-0807
Publisher versionhttps://iopscience.iop.org/article/10.1088/1361-6404/ab1a5c
Collections
Share: