The span of correlations in dolphin whistle sequences 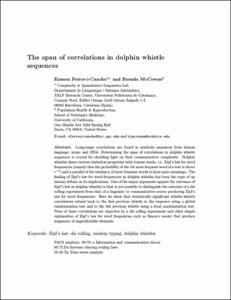 McCowan, Brenda
Document typeArticle
PublisherInstitute of Physics (IOP)
Rights accessOpen Access
Abstract
Long-range correlations are found in symbolic sequences from human language, music and DNA. Determining the span of correlations in dolphin whistle sequences is crucial for shedding light on their communicative complexity. Dolphin whistles share various statistical properties with human words, i.e. Zipf's law for word frequencies (namely that the probability of the ith most frequent word of a text is about i-a) and a parallel of the tendency of more frequent words to have more meanings. The finding of Zipf's law for word frequencies in dolphin whistles has been the topic of an intense debate on its implications. One of the major arguments against the relevance of Zipf's law in dolphin whistles is that it is not possible to distinguish the outcome of a die-rolling experiment from that of a linguistic or communicative source producing Zipf's law for word frequencies. Here we show that statistically significant whistle–whistle correlations extend back to the second previous whistle in the sequence, using a global randomization test, and to the fourth previous whistle, using a local randomization test. None of these correlations are expected by a die-rolling experiment and other simple explanations of Zipf's law for word frequencies, such as Simon's model, that produce sequences of unpredictable elements.
CitationFerrer-i-Cancho, R.; McCowan, B. The span of correlations in dolphin whistle sequences. "Journal of statistical mechanics: Theory and experiment", 11 Juny 2012, vol. 2012, article P06002, p. 1-12.
URIhttp://hdl.handle.net/2117/176938
DOI10.1088/1742-5468/2012/06/P06002
ISSN1742-5468
Publisher versionhttps://iopscience.iop.org/article/10.1088/1742-5468/2012/06/P06002/pdf
Other identifiershttp://arxiv.org/pdf/1205.0321v2.pdf
Collections
Share: