A New Park for Shanghai 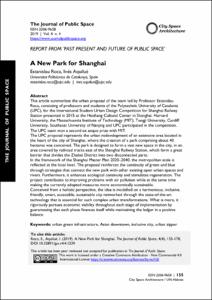 Except where otherwise noted, content on this work is licensed under a Creative Commons license : Attribution-NonCommercial 4.0 International
Abstract
This article summarizes the urban proposal of the team led by Professor Estanislau Roca, consisting of professors and students of the Polytechnic University of Catalonia (UPC), for the International Student Urban Design Competition for Shanghai Railway Station presented in 2015 at the Haishang Cultural Ce nter in Shanghai. Harvard University, the Massachusetts Institute of Te chnology (MIT), Tong ji University, Cardiff University, Southeast University of Nanjing and UPC participated in the competition. The UPC team won a second ex aequo prize with MIT. The UPC proposal represents the urban redeve lopment of an extensive area located in the heart of the city of Shanghai, where the creation of a park comprising about 40 hectares was conceived. The park is designed to form a vast new spac e in the city, in an area covered by railroad tracks east of the Shanghai Railway Station, which form a great barrier that divides the Zhabei Dist rict into two disconnected parts. In the framework of the Shanghai Master Plan 2020–2040, the metropolitan scale is reflected at the local level. The proposal re inforces the continuity of green and blue through strategies that connect the new park with other existing open urban spaces and rivers. Furthermore, it enhances ecological continuity and stimulates regeneration. The project contributes to improving problems with air pollution while at the same time making the currently adopted measures more economically sustainable. Conceived from a holistic perspective, the idea is modelled on a harmonious, inclusive, friendly, smart, accessible, sustainable ci ty networked through the state-of-the-art technology that is essential for such comple x urban transformations. What is more, it rigorously pursues economic viability thro ughout each stage of implementation by guaranteeing that each phase finances itself while maintaining the ledger in a positive balance.
CitationRoca, E.; Aquilue, I. A New Park for Shanghai. "The Journal of Public Space", Desembre 2019, vol. 4, núm. 4, p. 155-178.
URIhttp://hdl.handle.net/2117/176873
DOI10.32891/jps.v4i4.1239
ISSN2206-9658
Publisher versionhttps://www.journalpublicspace.org/index.php/jps/article/view/1239/754
Collections
Share: