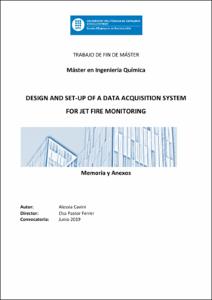 CovenanteeUniversità di Bologna
Document typeBachelor thesis
Rights accessOpen Access
All rights reserved. This work is protected by the corresponding intellectual and industrial property rights. Without prejudice to any existing legal exemptions, reproduction, distribution, public communication or transformation of this work are prohibited without permission of the copyright holder
Abstract
The accelerated development of industry in many countries has led to a significant rise of the use of pipelines in the transportation of oil, gas, and chemicals in recent years. These pipelines may lay over hundreds of kilometers, crossing urban and rural zones. An appropriate corridor, a hallway, is usually constructed and is often used for more than one pipe. The relatively small space between the pipes in the same hallway involves a certain risk associated to the potential interaction between the pipelines. Since in many cases the transported fluids are flammable, an accidental loss of containment such as a leak through a hole or a crack in one of the pipes could lead to an accident with severe consequences on people, equipment and environment. If a release from one of the pipes occurs, it can seriously affect the others by the so-called domino effect. The main risks associated with this domino effect are erosion by fluid-sand jets and thermal action of jet fires in the case of ignition of the released material. This particular type of accidental scenarios can multiply the scale of an accident and, thus, the severity of its consequences. For sure, the most severe scenarios that can occur is the development of a jet fire from one of the pipes. In this situation, the thermal flux reaching another pipe is very high, especially if there is a flame impingement, and it can damage the secondary target enlarging the scale of the accident and this scenario has not been sufficiently analyzed yet. For this purpose, a laboratory experimental set-up was designed to be used to obtain data concerning propane jet fires impinging on a pipe conveying a gas or a liquid in order to quantify the thermal response of a “secondary” object in the different possible situations. In this experimental set-up, measurements of heat flux, pressure, and temperature for various release rates of propane were performed with the adequate instrumentation. The aim of this thesis is to design a system to obtain and collect data from these different devices in order to give information on the conditions to which the pipe is subjected in the case of a fire. Initially, a data acquisition system was designed according to previous studies and considering the available instrumentation and space of the experimental site. Subsequently, preliminary tests were performed to characterize the jet fire condition, identify the best position for the equipment, adjust the instrumentation and test the operation of the all system elements. Based on these results, a set-up of the data acquisition system was assembled. Finally, the experimental protocol detailing all the operations to follow to perform a test was defined.
SubjectsPetroleum pipelines, Pipelines, Fire prevention, Oleoductes, Canonades, Incendis -- Prevenció
DegreeMOBILITAT INCOMING
URIhttp://hdl.handle.net/2117/176849
Collections
Share: