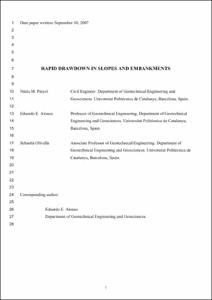 Document typeArticle
Rights accessOpen Access
All rights reserved. This work is protected by the corresponding intellectual and industrial property rights. Without prejudice to any existing legal exemptions, reproduction, distribution, public communication or transformation of this work are prohibited without permission of the copyright holder
Abstract
A large landslide (40 × 106 m3) was reactivated on the left bank of Canelles reservoir, Spain. The instability was made evident after a considerable reduction of the reservoir level. The drawdown took place during the summer of 2006 after several years of high water levels. The drawdown velocity reached values between 0.5 and 1.2 m/day (registered at low elevations). The paper reports the geological and geotechnical investigations performed to define the movement. The geometry of the slip surface was established from the detailed analysis of the continuous cores recovered in deep borings and from limited information provided by inclinometers. Deep piezometric records provided also valuable information on the pore water pressure in the vicinity of the failure surface. These data allowed validating a flow–deformation coupled calculation model, which takes into account the changes in water level that occurred 4 years previous to the failure as well as the average rainfall. The analysis indicates that the most likely reason for the instability is the rapid drawdown that took place during the summer of 2006. The potential sudden acceleration of the slide is also analysed in the paper introducing coupled thermal hydraulic and mechanical effects that may develop at the basal shearing surface of the sliding mass. The results indicate that the slide velocity may reach values around 16 m/s when displacement reaches 250 m.
Description
The final publication is available at Springer via http://dx.doi.org/10.1007/s10346-011-0264-x
CitationPinyol, N.M. [et al.]. Canelles landslide: modelling rapid drawdown and fast potential sliding. "Landslides", Març 2012, vol. 9, núm. 1, p. 33-51.
URIhttp://hdl.handle.net/2117/176414
DOI10.1007/s10346-011-0264-x
ISSN1612-510X
Publisher versionhttps://link.springer.com/article/10.1007/s10346-011-0264-x
Collections
Share: