The 1962 flash flood in the Rubí stream (Barcelona, Spain) 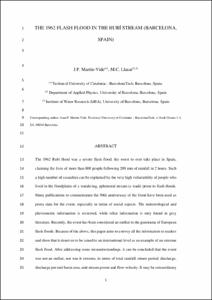 Except where otherwise noted, content on this work is licensed under a Creative Commons license : Attribution-NonCommercial-NoDerivs 3.0 Spain
ProjectANALISIS HOLISTICO DEL IMPACTO DE LAS PRECIPITACIONES EXTREMAS E INUNDACIONES Y SU INTRODUCCION EN ESCENARIOS FUTUROS. APLICACION A LAS ESTRATEGIAS DE ADAPTACION Y RESILIENCIA (MINECO-CGL2014-52571-R)
Abstract
The 1962 Rubí flood was a severe flash flood, the worst to ever take place in Spain, claiming the lives of more than 800 people following 200¿mm of rainfall in 2¿h. Such a high number of casualties can be explained by the very high vulnerability of people who lived in the floodplains of a wandering, ephemeral stream (a wadi) prone to flash floods. Many publications to commemorate the 50th anniversary of the flood have been used as proxy data for the event, especially in terms of social aspects. The meteorological and pluviometric information is reviewed, while other information is only found in grey literature. Recently, the event has been considered an outlier in the panorama of European flash floods. Because of the above, this paper aims to convey all the information to readers and show that it deserves to be raised to an international level as an example of an extreme flash flood. After addressing some misunderstandings, it can be concluded that the event was not an outlier, nor was it extreme, in terms of total rainfall, return period, discharge, discharge per unit basin area, unit stream power and flow velocity. It may be extraordinary because the flood reached very high levels by transporting large amounts of both fine and coarse sediment particles. The stream is steep, ephemeral, lacking an armour layer, and prone to torrential events, in which the large sediment transport played a role in how high the flood levels rose. The use of flooding marks to compute discharges is also discussed. In addition, the paper presents a torrential calculation based on the momentum principle in a control volume.
CitationMartín-Vide, J.P.; Llasat, C. The 1962 flash flood in the Rubí stream (Barcelona, Spain). "Journal of hydrology", Novembre 2018, vol. 566, p. 441-454.
URIhttp://hdl.handle.net/2117/176100
DOI10.1016/j.jhydrol.2018.09.028
ISSN0022-1694
Publisher versionhttps://www.sciencedirect.com/science/article/pii/S0022169418307157
Collections
Share: