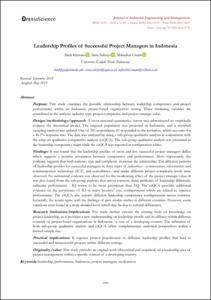 Purpose: This study examines the possible relationship between leadership competency and project performance within an Indonesia project-based organization setting. Four mediating variables are considered in the analysis: industry type, project complexity, project strategic value, and contract type. Design/methodology/approach: A cross-sectional quantitative survey was administered to empirically evaluate the theoretical model. The targeted population was projected in Indonesia, and a snowball sampling method was utilized. Out of 183 respondents, 81 responded to the invitation, which accounts for a 44.2% response rate. Findings: It was found that the leadership profiles of more and less successful project managers differ, which suggests a positive association between competency and performance. More importantly, the evidence suggests that both industry type and complexity moderate the relationship. The different patterns of leadership profiles for successful managers in three types of industries—const ruction, information and communication technology (ICT), and consultancy—and under different project complexity levels were observed. No substantial evidence was observed for the moderating effects of “project strategic value” and “contract type.” It was also found that across contexts, three attributes of leadership differently influence performance in the following order of importance: IQ, MQ, and EQ. Generally, the results agree with the findings of past similar studies in different countries. However, some variations were found at a more detailed level, which may be due to cultural differences. Research limitations/implications: The study further extends the existing body of knowledge on project leadership, as it provides a new understanding on leadership profile and its efficacy within different contexts of project-based organizations in Indonesia—a case of a developing country Practical implications: It exposes project practitioners to different leadership profiles that lead to successful and unsuccessful projects within different settings. Originality/value: This study provides an original work (theoretical and empirical) on a leadership area of project management within a specific context of a developing country.