STEM students’ perception of gender mainstreaming in teaching: the development of a measuring tool 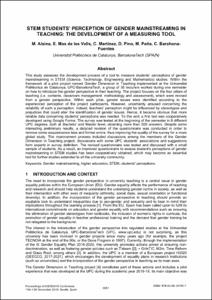 Document typeConference lecture
Rights accessOpen Access
European Commission's projectGEECCO - Gender Equality in Engineering through Communication and Commitment (EC-H2020-741128)
Abstract
This study assesses the development process of a tool to measure students’ perceptions of gender mainstreaming in STEM (Science, Technology, Engineering and Mathematics) studies. Within the framework of a pilot project named Gender Dimension in Teaching implemented at the Universitat Politècnica de Catalunya · BarcelonaTech (UPC), a group of 35 teachers worked during one semester on how to introduce the gender perspective in their teaching. This aim is especially relevant when considering STEM studies, since they have traditionally been defined as gender-neutral when, in fact, they are gender-blind. The teachers that participate in the project cover a wide range of STEM studies, including Architecture, Civil Engineering, ICT Systems Engineering, Naval Systems and Technology Engineering, Aerospace Systems Engineering, Applied Telecommunications and Engineering Management, Industrial Engineering and Environmental Pathways for Sustainable Energy Systems. The project is part of the III Gender Equality Plan at the UPC and is supported by GEECCO project, which receives funding from the European Union's Horizon 2020 Research and Innovation programme. The Gender Dimension in Teaching project focuses on the four pillars of teaching (i.e. contents, classroom management, methodology and assessment), which were revised from a gender perspective. Within each pillar, gender issues were identified according to the experienced perception of the project participants. These gender issues included, for instance, gender differences in classroom participation, the stereotypical roles adopted in teamwork activities, the use of female references as models for students, the adoption of a gender-inclusive language by both teachers and students, the use of stereotypes in teaching materials, gender bias in assessment, etc. However, uncertainty aroused concerning the reliability of such a perception. Indeed, teachers’ perception might be influenced by stereotypes and prejudices that could alter the identification of gender issues. Hence, it became obvious that more reliable data concerning students’ perceptions was needed. To this end, a first set of questions was collaboratively defined and a first survey was developed using Google Forms. The survey was tested at the beginning of the semester in 8 different UPC degrees, both at Bachelor and Master level, obtaining more than 500 answers. Despite some interesting preliminary results, a detailed revision of the questionnaire was conducted in order to remove some acquiescence bias and formal errors, thus improving the quality of the survey for a more global study. The improvement process included discussions among the members of the Gender Dimension in Teaching project, and discussions with the Feminist Assembly of the Industrial Engineering School at the UPC. As a final step, this revised survey was tested and discussed with a small sample of students. As a result, an improved survey to assess student’s perceptions of gender mainstreaming in STEM studies has been collaboratively obtained, which may become an essential tool for further studies extended to all the university community.
CitationAlsina, M. [et al.]. STEM students’ perception of gender mainstreaming in teaching: the development of a measuring tool. A: International Conference of Education, Research and Innovation. "ICERI 2019: 12th International Conference of Education, Research and Innovation: conference proceedings: Seville (Spain) 11-13 November 2019". 2019, p. 6851-6859.
URIhttp://hdl.handle.net/2117/176033
ISBN978-84-09-14755-7
Publisher versionhttps://library.iated.org/view/ALSINA2019STE
Collections
Share: