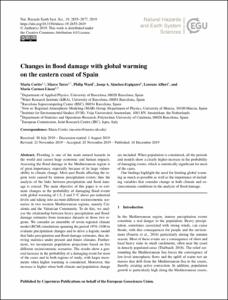 Alfieri, Lorenzo
Llasat Botija, Carmen
Document typeArticle
Rights accessOpen Access
European Commission's projectCLIM4CROP - Climate monitoring and seasonal forecast for global crop production (EC-H2020-740073)
Abstract
Flooding is one of the main natural hazards in the world and causes huge economic and human impacts. Assessing the flood damage in the Mediterranean region is of great importance, especially because of its large vulnerability to climate change. Most past floods affecting the region were caused by intense precipitation events; thus the analysis of the links between precipitation and flood damage is crucial. The main objective of this paper is to estimate changes in the probability of damaging flood events with global warming of 1.5, 2 and 3¿°C above pre-industrial levels and taking into account different socioeconomic scenarios in two western Mediterranean regions, namely Catalonia and the Valencian Community. To do this, we analyse the relationship between heavy precipitation and flood-damage estimates from insurance datasets in those two regions. We consider an ensemble of seven regional climate model (RCM) simulations spanning the period 1976–2100 to evaluate precipitation changes and to drive a logistic model that links precipitation and flood-damage estimates, thus deriving statistics under present and future climates. Furthermore, we incorporate population projections based on five different socioeconomic scenarios. The results show a general increase in the probability of a damaging event for most of the cases and in both regions of study, with larger increments when higher warming is considered. Moreover, this increase is higher when both climate and population change are included. When population is considered, all the periods and models show a clearly higher increase in the probability of damaging events, which is statistically significant for most of the cases. Our findings highlight the need for limiting global warming as much as possible as well as the importance of including variables that consider change in both climate and socioeconomic conditions in the analysis of flood damage.
CitationCortés, M. [et al.]. Changes in flood damage with global warming on the eastern coast of Spain. "Natural hazards and earth system sciences", 18 Desembre 2019, vol. 19, p. 2855-2877.
URIhttp://hdl.handle.net/2117/175995
DOI10.5194/nhess-19-2855-2019
ISSN1561-8633
Publisher versionhttps://www.nat-hazards-earth-syst-sci.net/19/2855/2019/
Collections
Share: