The UAVs threat to airport security: risk analysis and mitigation 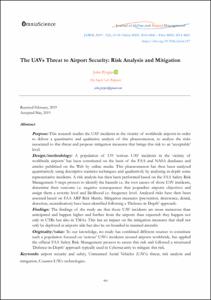 Except where otherwise noted, content on this work is licensed under a Creative Commons license : Attribution-NonCommercial 3.0 Spain
Abstract
Purpose: This research studies the UAV incidents in the vicinity of worldwide airports in order to deliver a quantitative and qualitative analysis of this phaenomenon, to analyse the risks associated to this threat and propose mitigation measures that brings this risk to an ‘acceptable’ level. Methodology: A population of 139 ‘serious UAV incidents in the vicinity of worldwide airports’ has been constituted on the basis of the FAA and NASA databases and articles published on the Web by online media. This phaenomenon has then been analysed quantitatively using descriptive statistics techniques and qualitatively by analysing in-depth some representative incidents. A risk analysis has then been performed based on the FAA Safety Risk Management 5-steps process to identify the hazards i.e. the root causes of those UAV incidents, determine their outcome i.e. negative consequences that jeopardize airports objectives and assign them a severity level and likelihood i.e. frequency level. Analysed risks have then been assessed based on FAA ARP Risk Matrix. Mitigation measures (prevention, deterrence, denial, detection, neutralisation) have been identified following a ‘Defence-in-Depth’ approach. Findings: The findings of the study are that those UAV incidents are more numerous than anticipated and happen higher and further from the airports than expected: they happen not only in CTRs but also in TMAs. This has an impact on the mitigation measures that shall not only be deployed at airports side but also be on-boarded in manned aircrafts. Originality: To our knowledge, no study has combined different sources to constitute such a population focused on ‘serious’ UAVs incidents around airports worldwide, has applied the official FAA Safety Risk Management process to assess this risk and followed a structured ‘Defence-in-Depth’ approach typically used in Cybersecurity to mitigate this risk.
CitationPyrgies, J. The UAVs threat to airport security: risk analysis and mitigation. "Journal of Airline and Airport Management", Desembre 2019, vol. 9, núm. 2, p. 63-96.
URIhttp://hdl.handle.net/2117/175967
DOI10.3926/jairm.127
ISSN2014-4806
Collections
Share: