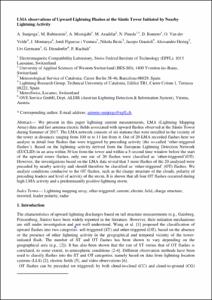 Figueras i Ventura, Jordi
Besic, Nikola
Grazioli, Jacopo
Hering, Alessandro
Germann, Urs
Diendorfer, Gerhard
Rachidi-Haeri, Farhad
Document typeArticle
Rights accessOpen Access
All rights reserved. This work is protected by the corresponding intellectual and industrial property rights. Without prejudice to any existing legal exemptions, reproduction, distribution, public communication or transformation of this work are prohibited without permission of the copyright holder
Abstract
We present in this paper lightning current measurements, LMA (Lightning Mapping Array) data and fast antenna electric fields associated with upward flashes observed at the Säntis Tower during summer of 2017. The LMA network consists of six stations that were installed in the vicinity of the tower at distances ranging from 100¿m to 11¿km from it. Out of 20 LMA recorded flashes here we analyze in detail three so-called ‘other-triggered flashes’, triggered by preceding activity. Based on the lightning activity derived from the European Lightning Detection Network (EUCLID) in an area within 30¿km from the tower and within a 1-s time window before the start of the upward tower flashes, only one out of 20 flashes was classified as ‘other-triggered’(OT). However, the investigations based on the LMA data reveal that 3 more flashes of the 20 analyzed were preceded by nearby activity and should therefore be classified as OT flashes. We analyze conditions conducive to the OT flashes, such as the charge structure of the clouds, polarity of preceding leaders and level of activity of the storm. The LMA source active time period was on average seven times higher for the OT flashes than that for self-initiated flashes.
CitationSunjerga, A. [et al.]. LMA observations of upward lightning flashes at the Säntis Tower initiated by nearby lightning activity. "Electric power systems research", Abril 2020, vol. 181, p. 1-12.
URIhttp://hdl.handle.net/2117/175966
DOI10.1016/j.epsr.2019.106067
ISSN0378-7796
Publisher versionhttps://www.sciencedirect.com/science/article/abs/pii/S0378779619303864
Collections
Share: