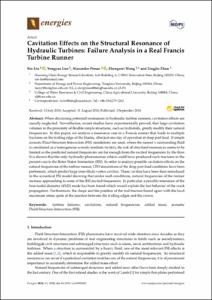 Except where otherwise noted, content on this work is licensed under a Creative Commons license : Attribution 4.0 International
Abstract
When discussing potential resonances in hydraulic turbine runners, cavitation effects are usually neglected. Nevertheless, recent studies have experimentally proved, that large cavitation volumes in the proximity of flexible simple structures, such as hydrofoils, greatly modify their natural frequencies. In this paper, we analyze a resonance case in a Francis runner that leads to multiple fractures on the trailing edge of the blades, after just one day of operation at deep part load. If simple acoustic Fluid-Structure-Interaction (FSI) simulations are used, where the runner’s surrounding fluid is considered as a homogenous acoustic medium (water), the risk of structural resonances seems to be limited as the predicted natural frequencies are far enough from the excited frequencies by the flow. It is shown that the only hydraulic phenomenon which could have produced such fractures in the present case is the Rotor Stator Interaction (RSI). In order to analyze possible cavitation effects on the natural frequencies of the turbine runner, CFD simulations of the deep part load conditions have been performed, which predict large inter-blade vortex cavities. These cavities have been then introduced in the acoustical FSI model showing that under such conditions, natural frequencies of the runner increase approaching to some of the RSI excited frequencies. In particular, a possible resonance of the four-nodal diameter (4ND) mode has been found which would explain the fast behavior of the crack propagation. Furthermore, the shape and the position of the real fracture found agree with the local maximum stress spots at the junction between the trailing edges and the crow.
CitationLiu, X. [et al.]. Cavitation effects on the structural resonance of hydraulic turbines: Failure analysis in a real francis turbine runner. "Energies", 3 Setembre 2018, vol. 11, núm. 9, p. 2320:1-2320:16.
URIhttp://hdl.handle.net/2117/175897
DOI10.3390/en11092320
ISSN1996-1073
Publisher versionhttps://www.mdpi.com/1996-1073/11/9/2320
Collections
Share: