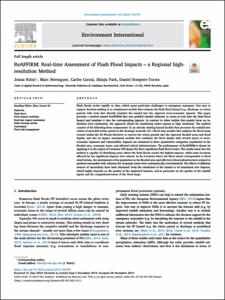 Except where otherwise noted, content on this work is licensed under a Creative Commons license : Attribution-NonCommercial-NoDerivs 4.0 International
ProjectANYWHERE - EnhANcing emergencY management and response to extreme WeatHER and climate Events (EC-H2020-700099)
Abstract
Flash floods evolve rapidly in time, which poses particular challenges to emergency managers. One way to support decision-making is to complement models that estimate the flash flood hazard (e.g. discharge or return period) with tools that directly translate the hazard into the expected socio-economic impacts. This paper presents a method named ReAFFIRM that uses gridded rainfall estimates to assess in real time the flash flood hazard and translate it into the corresponding impacts. In contrast to other studies that mainly focus on in- dividual river catchments, the approach allows for monitoring entire regions at high resolution. The method consists of the following three components: (i) an already existing hazard module that processes the rainfall into values of exceeded return period in the drainage network, (ii) a flood map module that employs the flood maps created within the EU Floods Directive to convert the return periods into the expected flooded areas and flood depths, and (iii) an impact assessment module that combines the flood depths with several layers of socio- economic exposure and vulnerability. Impacts are estimated in three quantitative categories: population in the flooded area, economic losses, and affected critical infrastructures. The performance of ReAFFIRM is shown by applying it in the region of Catalonia (NE Spain) for three significant flash flood events. The results show that the method is capable of identifying areas where the flash floods caused the highest impacts, while some locations affected by less significant impacts were missed. In the locations where the flood extent corresponded to flood observations, the assessments of the population in the flooded area and affected critical infrastructures seemed to perform reasonably well, whereas the economic losses were systematically overestimated. The effects of different sources of uncertainty have been discussed: from the estimation of the hazard to its translation into impacts, which highly depends on the quality of the employed datasets, and in particular on the quality of the rainfall inputs and the comprehensiveness of the flood maps.
CitationRitter, J. [et al.]. ReAFFIRM: Real-time Assessment of Flash Flood Impacts: a Regional high-resolution Method. "Environment international", Març 2020, vol. 136, p. 105375:1-105375:16.
URIhttp://hdl.handle.net/2117/175869
DOI10.1016/j.envint.2019.105375
ISSN0160-4120
Publisher versionhttps://www.sciencedirect.com/science/article/pii/S0160412019314485
Collections
Share: