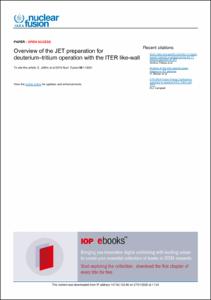 Document typeArticle
Rights accessOpen Access
European Commission's projectEUROfusion - Implementation of activities described in the Roadmap to Fusion during Horizon 2020 through a Joint programme of the members of the EUROfusion consortium (EC-H2020-633053)
Abstract
For the past several years, the JET scientific programme (Pamela et al 2007 Fusion Eng. Des.82 590) has been engaged in a multi-campaign effort, including experiments in D, H and T, leading up to 2020 and the first experiments with 50%/50% D–T mixtures since 1997 and the first ever D–T plasmas with the ITER mix of plasma-facing component materials. For this purpose, a concerted physics and technology programme was launched with a view to prepare the D–T campaign (DTE2). This paper addresses the key elements developed by the JET programme directly contributing to the D–T preparation. This intense preparation includes the review of the physics basis for the D–T operational scenarios, including the fusion power predictions through first principle and integrated modelling, and the impact of isotopes in the operation and physics of D–T plasmas (thermal and particle transport, high confinement mode (H-mode) access, Be and W erosion, fuel recovery, etc). This effort also requires improving several aspects of plasma operation for DTE2, such as real time control schemes, heat load control, disruption avoidance and a mitigation system (including the installation of a new shattered pellet injector), novel ion cyclotron resonance heating schemes (such as the three-ions scheme), new diagnostics (neutron camera and spectrometer, active Alfvèn eigenmode antennas, neutral gauges, radiation hard imaging systems...) and the calibration of the JET neutron diagnostics at 14 MeV for accurate fusion power measurement. The active preparation of JET for the 2020 D–T campaign provides an incomparable source of information and a basis for the future D–T operation of ITER, and it is also foreseen that a large number of key physics issues will be addressed in support of burning plasmas.
CitationJoffrin, E. [et al.]. Overview of the JET preparation for deuterium-tritium operation with the ITER like-wall. "Nuclear fusion", 1 Novembre 2019, vol. 59, núm. 11, p. 112021:1-112021:25.
URIhttp://hdl.handle.net/2117/175778
DOI10.1088/1741-4326/ab2276
ISSN0029-5515
Publisher versionhttps://iopscience.iop.org/article/10.1088/1741-4326/ab2276
Collections
Share: