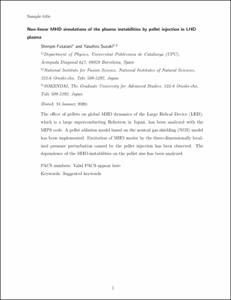 Suzuki, Yasuhiro
Document typeArticle
Rights accessOpen Access
Abstract
The effect of pellets on the global magnetohydrodynamic (MHD) dynamics of the Large Helical Device (LHD), which is a large superconducting heliotron in Japan, has been analyzed with the MIPS code. A pellet ablation model based on the neutral gas shielding model has been implemented. Excitation of MHD modes by the three-dimensionally localized pressure perturbation caused by the pellet injection has been observed. The dependence of the MHD-instabilities on the pellet size has been analyzed.
CitationFutatani, S.; Suzuki, Y. Non-linear magnetohydrodynamic simulations of plasma instabilities from pellet injection in Large Helical Device plasma. "Plasma physics and controlled fusion", 13 Agost 2019, vol. 61, núm. 9, p. 095014.
URIhttp://hdl.handle.net/2117/175768
DOI10.1088/1361-6587/ab34aa
ISSN0741-3335
Publisher versionhttps://iopscience.iop.org/article/10.1088/1361-6587/ab34aa/meta
Collections
Share: