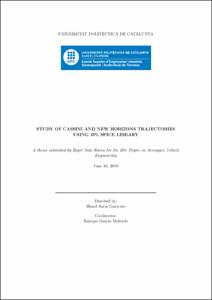 Document typeBachelor thesis
Rights accessOpen Access
Abstract
The obtaining of scientific data in interplanetary missions is based on a series of complex algorithms that serve to plan and develop the experiments.At different stages of the mission, due to the fact that the conditions planned to do each observation can end up not being the ones that actually happen, the best timing to carry out each observation must be recalculated.Therefore, the objective of this project is to understand and implement a subset of the algorithms used to obtain scientific data, using Matlab and SPICE, a library created by JPL, which is a software tool that contains a series of functions that are helpful when designing observations.In this project, a series of SPICE-based algorithms have been developed to calculate occultations, transit and the illumination of celestial bodies. Specifically,in this project are studied the flybys that were made by the probes: Cassini,Voyager and New Horizons, on the different planets for which they passed by. Forthe case of when Cassini flies over Jupiter, observations have been designed in two different ways; one considering whether the camera was pointing to the planet andthe other without taking it into account.The results obtained from the algorithms have been compared with the real trajectories already made, obtaining satisfactory results. It has also been proven from navigated images that the algorithms work correctly. Another algorithm has also been created to calculate the time interval during which the transit of a celestial body can be seen in front of another, from anyplanet. In particular, it has been tested with the transit that Mercury is going to make on November 11, 2019, achieving the expected result.
SubjectsOuter space--Exploration, Space trajectories, Espai exterior -- Exploració, Trajectòries espacials
URIhttp://hdl.handle.net/2117/175731
Collections
Share: