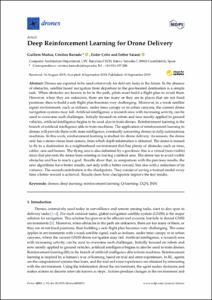 Except where otherwise noted, content on this work is licensed under a Creative Commons license : Attribution 3.0 Spain
Abstract
Drones are expected to be used extensively for delivery tasks in the future. In the absence of obstacles, satellite based navigation from departure to the geo-located destination is a simple task. When obstacles are known to be in the path, pilots must build a flight plan to avoid them. However, when they are unknown, there are too many or they are in places that are not fixed positions, then to build a safe flight plan becomes very challenging. Moreover, in a weak satellite signal environment, such as indoors, under trees canopy or in urban canyons, the current drone navigation systems may fail. Artificial intelligence, a research area with increasing activity, can be used to overcome such challenges. Initially focused on robots and now mostly applied to ground vehicles, artificial intelligence begins to be used also to train drones. Reinforcement learning is the branch of artificial intelligence able to train machines. The application of reinforcement learning to drones will provide them with more intelligence, eventually converting drones in fully-autonomous machines. In this work, reinforcement learning is studied for drone delivery. As sensors, the drone only has a stereo-vision front camera, from which depth information is obtained. The drone is trained to fly to a destination in a neighborhood environment that has plenty of obstacles such as trees, cables, cars and houses. The flying area is also delimited by a geo-fence; this is a virtual (non-visible) fence that prevents the drone from entering or leaving a defined area. The drone has to avoid visible obstacles and has to reach a goal. Results show that, in comparison with the previous results, the new algorithms have better results, not only with a better reward, but also with a reduction of its variance. The second contribution is the checkpoints. They consist of saving a trained model every time a better reward is achieved. Results show how checkpoints improve the test results.
Description
This work was funded by the Ministry of Science, Innovation and Universities of Spain under Grant No. TRA2016-77012-R.
CitationMuñoz, G. [et al.]. Deep reinforcement learning for drone delivery. "Drones", 10 Setembre 2019, vol. 3, núm. 3.
URIhttp://hdl.handle.net/2117/175691
DOI10.3390/drones3030072
ISSN2504-446X
Publisher versionhttps://www.mdpi.com/2504-446X/3/3/72
Collections
Share: