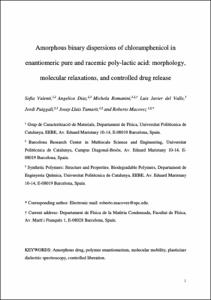 Document typeArticle
Rights accessOpen Access
Abstract
We study amorphous solid dispersions (ASDs) of the chloramphenicol antibiotic in two biodegradable polylactic acid polymers, namely a commercial sample of enantiomeric pure PLLA and a home-synthesized PDLLA copolymer, to study the effect of polylactic acid in stabilizing the amorphous form of the drug and controlling its release (e.g. for antitumoral purposes). We employ broadband dielectric spectroscopy and differential scanning calorimetry to study the homogeneity, glass transition temperature and relaxation dynamics of solvent-casted ASD membranes with different drug concentrations. We observe improved physical stability of the ASDs with respect to the pure drug, as well as a plasticizing effect of the antibiotic on the polymer, well described by the Gordon-Taylor equation. We study the release of the active pharmaceutical ingredient from the films in a simulated body fluid through UV/vis spectroscopy at two different drug concentrations (5 and 20% in weight), and find that the amount of released drug is proportional to the square root of time, with proportionality constant that is almost the same in both dispersions, despite the fact that the relaxation time and thus the viscosity of the two samples at body temperature differ by four orders of magnitude. The drug release kinetics does not display a significant dependence on the drug content in the carrier, and may thus be expected to remain roughly constant during longer release times.
CitationValenti, S. [et al.]. Amorphous binary dispersions of chloramphenicol in enantiomeric pure and racemic poly-lactic acid: morphology, molecular relaxations, and controlled drug release. "International journal of pharmaceutics", 10 Setembre 2019, vol. 568, p. 1-11.
URIhttp://hdl.handle.net/2117/175471
DOI10.1016/j.ijpharm.2019.118565
ISSN0378-5173
Publisher versionhttps://www.sciencedirect.com/science/article/pii/S037851731930609X
Collections
Share: