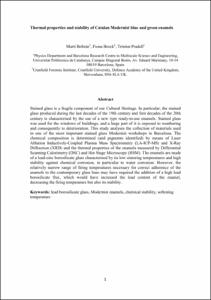 Document typeArticle
Rights accessOpen Access
Abstract
Stained glass is a fragile component of our Cultural Heritage. In particular, the stained glass produced during the last decades of the 19th century and first decades of the 20th century is characterised by the use of a new type ready-to-use enamels. Stained glass was used for the windows of buildings, and a large part of it is exposed to weathering and consequently to deterioration. This study analyses the collection of materials used in one of the most important stained glass Modernist workshops in Barcelona. The chemical composition is determined (and pigments identified) by means of Laser Ablation Inductively-Coupled Plasma Mass Spectrometry (LA-ICP-MS) and X-Ray Diffraction (XRD) and the thermal properties of the enamels measured by Differential Scanning Calorimetry (DSC) and Hot Stage Microscopy (HSM). The enamels are made of a lead-zinc borosilicate glass characterised by its low sintering temperatures and high stability against chemical corrosion, in particular to water corrosion. However, the relatively narrow range of firing temperatures necessary for correct adherence of the enamels to the contemporary glass base may have required the addition of a high lead borosilicate flux, which would have increased the lead content of the enamel, decreasing the firing temperature but also its stability.
CitationBeltran, M.; Brock, F.; Pradell, T. Thermal properties and stability of Catalan Modernist blue and green enamels. "International Journal of Applied Glass Science", 1 Gener 2019, p. 1-30.
URIhttp://hdl.handle.net/2117/175409
DOI10.1111/ijag.13098
ISSN2041-1286
Publisher versionhttps://ceramics.onlinelibrary.wiley.com/doi/abs/10.1111/ijag.13098
Collections
Share: