Study, design, construction and validation of a flight director for VFR flights for en-route operation of a Cessna C-152 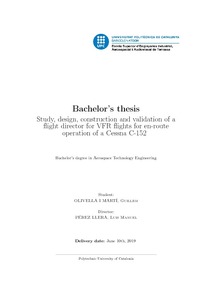 A flight director for a Cessna 152 (single engine, fix propeller aircraft) for en-route operation has been designed, implemented and tested. The hardware, totally independent of the aircraft instruments and systems, was an iOS platform with GNSS capabilities (iPhone XR). The path following law employed has been a pure pursuit algorithm in the horizontal path; and, the flight technique used consisted on reaching the desired altitude at the same time that the aircraft was established in the correct course to cross the target point with levelled wings. The algorith mused involved two parallel PIDs controllers (one for the horizontal path and the other for thevertical profile) with variable, interconnected saturations to display pitch and bank commands tothe pilot. The parameters that characterized the control action have been tuned using heuristic methods during flight tests and using a Simulink model, through which the aircraft-pilot-instrument interaction has been simulated. The flight tests executed by three different subjects showed tha talthough following the flight director commands resulted in crossing the way points at the correct altitude, the work load for the pilot was excessive. The stress showed by the pilots when following commands of pitch, roll and engine regime by the flight director was bigger than when not followingthe instrument. Moreover, the comparison of the flights profiles between the different pilots with different quantities of flight hours revelled that a good understanding of the aircraft dynamics was fundamental to efficiently following the instrument commands.
SubjectsNavigation (Aeronautics), Flight control, Flight navigators, Navegació aèria, Sistemes de control (Vol)
URIhttp://hdl.handle.net/2117/175395