The small-world of human language 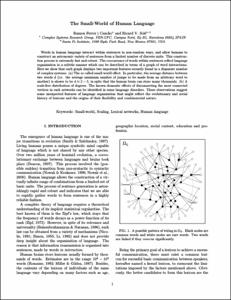 Vicente Solé, Ricardo
Document typeArticle
PublisherThe Royal Society
Rights accessOpen Access
Abstract
Words in human language interact in sentences in non–random ways, and allow humans to construct an astronomic variety of sentences from a limited number of discrete units. This construction process is extremely fast and robust. The co–occurrence of words in sentences reflects language organization in a subtle manner that can be described in terms of a graph of word interactions. Here, we show that such graphs display two important features recently found in a disparate number of complex systems. (i) The so called small–world effect. In particular, the average distance between two words, d (i.e. the average minimum number of links to be crossed from an arbitrary word to another), is shown to be d˜ 2–3, even though the human brain can store many thousands. (ii) A scale–free distribution of degrees. The known pronounced effects of disconnecting the most connected vertices in such networks can be identified in some language disorders. These observations indicate some unexpected features of language organization that might reflect the evolutionary and social history of lexicons and the origins of their flexibility and combinatorial nature.
CitationFerrer-i-Cancho, R.; Vicente, R. The small-world of human language. "Proceedings of the Royal Society B. Biological sciences", 7 Novembre 2001, vol. 268, núm. 1482, p. 2261-2266.
URIhttp://hdl.handle.net/2117/175371
DOI10.1098/rspb.2001.1800
ISSN0962-8452
Publisher versionhttps://royalsocietypublishing.org/doi/10.1098/rspb.2001.1800
Collections
Share: