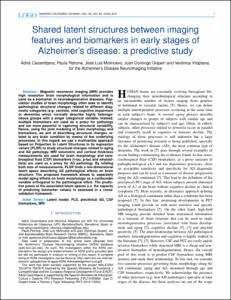 Document typeArticle
Rights accessOpen Access
Abstract
Magnetic resonance imaging (MRI) provides high resolution brain morphological information and is used as a biomarker in neurodegenerative diseases. Population studies of brain morphology often seek to identify pathological structural changes related to different diagnostic categories (e.g: controls, mild cognitive impairment or dementia) which normally describe highly heterogeneous groups with a single categorical variable. Instead, multiple biomarkers are used as a proxy for pathology and are more powerful in capturing structural variability. Hence, using the joint modeling of brain morphology and biomarkers, we aim at describing structural changes related to any brain condition by means of few underlying processes. In this regard, we use a multivariate approach based on Projection to Latent Structures in its regression variant (PLSR) to study structural changes related to aging and AD pathology. MRI volumetric and cortical thickness measurements are used for brain morphology and cerebrospinal fluid (CSF) biomarkers (t-tau, p-tau and amyloid-beta) are used as a proxy for AD pathology. By relating both sets of measurements, PLSR finds a low-dimensional latent space describing AD pathological effects on brain structure. The proposed framework allows to separately model aging effects on brain morphology as a confounder variable orthogonal to the pathological effect. The predictive power of the associated latent spaces (i.e. the capacity of predicting biomarker values) is assessed in a cross-validation framework.
Description
© 2019 IEEE. Personal use of this material is permitted. Permission from IEEE must be obtained for all other uses, in any current or future media, including reprinting/republishing this material for advertising or promotional purposes,creating new collective works, for resale or redistribution to servers or lists, or reuse of any copyrighted component of this work in other works.
CitationCasamitjana, A. [et al.]. Shared latent structures between imaging features and biomarkers in early stages of Alzheimer's disease: a predictive study. "IEEE Journal of Biomedical and Health Informatics", 1 Agost 2019.
URIhttp://hdl.handle.net/2117/175339
DOI10.1109/JBHI.2019.2932565
ISSN2168-2194
Publisher versionhttps://ieeexplore.ieee.org/document/8784176
Collections
Share: