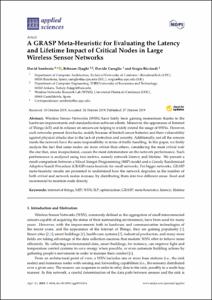 Document typeArticle
PublisherMultidisciplinary Digital Publishing Institute
Rights accessOpen Access
Abstract
Wireless Sensor Networks (WSN) have lately been gaining momentum thanks to the hardware improvements and standardization software efforts. Moreover, the appearance of Internet of Things (IoT) and its reliance on sensors are helping to widely extend the usage of WSNs. However, such networks present drawbacks, mainly because of limited sensor batteries and their vulnerability against physical attacks due to the lack of protection and security. Additionally, not all the sensors inside the network have the same responsibility in terms of traffic handling. In this paper, we firstly analyze the fact that some nodes are more critical than others, considering the most critical node the one that, once incapacitated, causes the most deterioration on the network performance. Such performance is analyzed using two metrics, namely network latency and lifetime. We present a result comparison between a Mixed Integer Programming (MIP) model and a Greedy Randomized Adaptive Search Procedure (GRASP) meta-heuristic for small networks. For bigger networks, GRASP meta-heuristic results are presented to understand how the network degrades as the number of both critical and network nodes increase, by distributing them into two different areas: fixed and incremental to maintain node density.
CitationSembroiz, D. [et al.]. A GRASP meta-heuristic for evaluating the latency and lifetime impact of critical nodes in large wireless sensor networks. "Applied sciences", 1 Novembre 2019, vol. 9, núm. 21, p. 4564:1-4564:22.
URIhttp://hdl.handle.net/2117/175237
DOI10.3390/app9214564
ISSN2076-3417
Publisher versionhttps://www.mdpi.com/2076-3417/9/21/4564
Collections
Share: