Study of entry, descent and landing of a low mass system at Mars 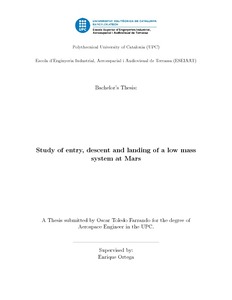 Except where otherwise noted, content on this work is licensed under a Creative Commons license : Attribution-NonCommercial-NoDerivs 3.0 Spain
Abstract
Since the Mariner 4 Martian mission, which was the rst one in succeeding in the red planet, the spatial race to study Mars has experimented a huge growth. One of its challenges is to deal with the thin atmosphere of the red planet, which demands very accurate design of the entry, descent and landing (EDL) system. This thesis develops a preliminary design of the EDL system of a small payload (see (Pasolini et al., 2017)), which consists of an aeroshell system for the reentry and the hypersonic and supersonic phases. Once the capsule has reached a subsonic velocity, a parachute is used for descent in the last ight phase. This project also includes the development of a parametric ight simulator to calculate the trajectory of the capsule. A CFD model is used to calculate the aerodynamic parameters of the hypersonic and supersonic phases. For the subsonic ight, as there is a wide variety of results in the literature, a suitable parachute model is selected from existing experimental data.
SubjectsMars (Planet)--Exploration, Space vehicles -- Atmospheric entry, Space vehicles--Aerodynamics, Mart (Planeta) -- Exploració, Vehicles espacials -- Entrada atmosfèrica, Vehicles espacials -- Aerodinàmica, vehicles es
DegreeGRAU EN ENGINYERIA EN VEHICLES AEROESPACIALS (Pla 2010)
URIhttp://hdl.handle.net/2117/175122
Collections
Share: