Short-term effects of particulate matter on mortality during forest fires in Southern Europe: results of the MED-PARTICLES Project 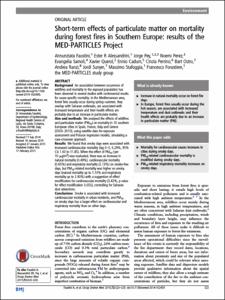 Document typeArticle
Rights accessOpen Access
Abstract
An association between occurrence of wildfires and mortality in the exposed population has been observed in several studies with controversial results for cause-specific mortality. In the Mediterranean area, forest fires usually occur during spring-summer, they overlap with Saharan outbreaks, are associated with increased temperature and their health effects are probably due to an increase in particulate matter. We analysed the effects of wildfires and particulate matter (PM10) on mortality in 10 southern European cities in Spain, France, Italy and Greece (2003-2010), using satellite data for exposure assessment and Poisson regression models, simulating a case-crossover approach. We found that smoky days were associated with increased cardiovascular mortality (lag 0-5, 6.29%, 95% CIs 1.00 to 11.85). When the effect of PM10 (per 10 µg/m(3)) was evaluated, there was an increase in natural mortality (0.49%), cardiovascular mortality (0.65%) and respiratory mortality (2.13%) on smoke-free days, but PM10-related mortality was higher on smoky days (natural mortality up to 1.10% and respiratory mortality up to 3.90%) with a suggestion of effect modification for cardiovascular mortality (3.42%, p value for effect modification 0.055), controlling for Saharan dust advections. Smoke is associated with increased cardiovascular mortality in urban residents, and PM10 on smoky days has a larger effect on cardiovascular and respiratory mortality than on other days.
CitationFaustini, A. [et al.]. Short-term effects of particulate matter on mortality during forest fires in Southern Europe: results of the MED-PARTICLES Project. "Occupational and environmental medicine", 14 Abril 2015, vol. 72, núm. 5, p. 323-329.
URIhttp://hdl.handle.net/2117/175116
DOI10.1136/oemed-2014-102459
ISSN1351-0711
Publisher versionhttps://oem.bmj.com/content/72/5/323
Other identifiershttps://www.researchgate.net/publication/272513895_Short-term_effects_of_particulate_matter_on_mortality_during_forest_fires_in_Southern_Europe_Results_of_the_MED-PARTICLES_Project
Collections
Share: