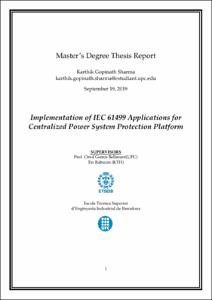 Document typeMaster thesis
Rights accessOpen Access
Abstract
With the onset of distributed energy resources in the electricity generation, the scenarios for protection and automation are becoming challenging. Even with guidelines like IEC61850 which focuses on digital substations there is a big issue in terms of integrating systems from different vendors. On the other hand IEC 61499 is moving ahead with enabling distributed automation and control in Industrial environment. This report aims to answer if it is possible to design an IED based on IEC61850 using IEC61499. This is achieved by writing the whole communication layers for IEC 61850 SV and GOOSE communication systems using linux socket programming in c++ which is the language in which IEC61499 4diac-forte has been written at the back end. Function Blocks were developed using IEC61499 4diac-ide which would mimic the IEC 61850 based logical nodes. A series of test cases where conducted and analysed. Based on the analysis we can say that it is possible to build a system to which is able to mimic a IED based on IEC61850 using the IEC61499 framework for Distributed Industrial Automation and Control. The results also show that at the current stage due to delays in the internal threads of the software code it isn’t possible to reach the extent which can be achieved using a specific hardware, but there is also hope that as the software undergoes development it is possible to be able to reach a considerable pace. The whole implementation was carried out using c++ and is available for everyone
SubjectsSystem design, Disseny de sistemes, Energia elèctrica -- Protecció
URIhttp://hdl.handle.net/2117/174899
Collections
Share: