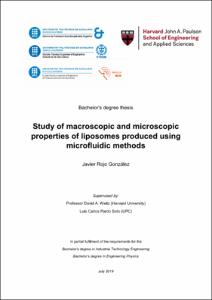 CovenanteeHarvard John A. Paulson School of Engineering and Applied Sciences
Document typeBachelor thesis
Rights accessOpen Access
Abstract
For the last decades, lipid vesicles or liposomes, vesicles formed by a bilayer of amphiphilic lipids, have been used as a toy model for studying the cell membrane and for applications in cosmetics and drug delivery. Traditional methods for producing liposomes face some problems such as the heterogeneity in size and composition of the liposomes produced. A few years ago, a novel method that produces liposomes with homogeneous size and composition was developed. This novel method is based on the use of water in oil in water ultra-thin double emulsions, with lipids dissolved in the oil phase, as templates for the liposome production. These ultra-thin double emulsions are produced using glass capillary microfluidic devices. This new method for producing liposomes seems very promising, but since the liposomes are formed by the oil phase evaporation of the double emulsions, the doubt that some residual oil in the bilayer may alter the properties of the liposomes appears. In this work different phenomena and properties of liposomes that have been studied for the ones produced using conventional methods are studied for liposomes produced using microfluidic methods. The microfluidic appr
SubjectsLiposomes
Location
1: Universitat de Harvard, 29 Oxford St, Cambridge, MA 02138, Estats Units d'Amèrica
URIhttp://hdl.handle.net/2117/174893
Collections
Share: