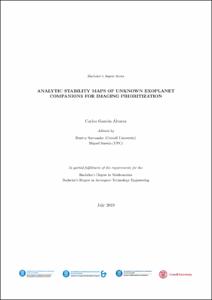 CovenanteeCornell University
Document typeBachelor thesis
Rights accessOpen Access
Abstract
Identifying which systems are more likely to host an imageable planet can play an important role in the construction of an optimized target list for future direct imaging missions, such as the planned technology demonstration for the Wide Field Infrared Survey Telescope (WFIRST). For single-planet systems, the presence of an already detected exoplanet can severely restrict the target's stable region and should therefore be considered when searching for unknown companions. To do so, we rst analyze the performance and robustness of several two-planet stability criteria by comparing them with long-term numerical simulations. We then derive the necessary formulation for the computation of (a, R) analytic stability maps, which can be used in conjunction with depth- of-search grids in order to de ne the stable-imageable region of a system. The dynamically stable completeness (i.e., the expected number of imageable and stable planets) can then be calculated via convolution with the selected occurrence grid, obtaining a metric that can be directly compared for imaging prioritization. Applying this procedure to all the currently known single-planet systems within a distance of 50 pc, we construct a ranked target list based on the WFIRST CGI's predicted performance and SAG13 occurrence rates
SubjectsNumerical analysis, Anàlisi numèrica
DegreeGRAU EN ENGINYERIA EN TECNOLOGIES AEROESPACIALS/GRAU EN MATEMÀTIQUES
Location
1: Cradit Farm Dr, Ithaca, NY 14850, Estats Units d'Amèrica
URIhttp://hdl.handle.net/2117/174887
Collections
Share: