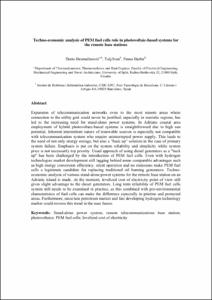 Expansion of telecommunication networks even to the most remote areas where connection to the utility grid could never be justified, especially in touristic regions, has led to the increasing need for stand-alone power systems. In Adriatic coastal area employment of hybrid photovoltaic-based systems is straightforward due to high sun potential. Inherent intermittent nature of renewable sources is especially not compatible with telecommunication system who require uninterrupted power supply. This leads to the need of not only energy storage, but also a "back up" solution in the case of primary system failure. Emphasis is put on the system reliability and simplicity while system price is not necessarily top priority. Usual approach of using diesel generators as a "back up" has been challenged by the introduction of PEM fuel cells. Even with hydrogen technologies market development still lagging behind some comparable advantages such as high energy conversion efficiency, silent operation and no emissions make PEM fuel cells a legitimate candidate for replacing traditional oil burning generators. Technoeconomic analysis of various stand-alone power systems for the remote base station on an Adriatic island is made. At the moment, levelized cost of electricity point of view still gives slight advantage to the diesel generators. Long term reliability of PEM fuel cells system still needs to be examined in practice, as this combined with pro-environmental characteristics of fuel cells can make the difference especially in pristine and protected areas. Furthermore, uncertain petroleum market and fast developing hydrogen technology market could reverse this trend in the near future.
CitationBezmalinovic, D.; Barbir, F.; Tolj, I. Techno-economic analysis of PEM fuel cells role in photovoltaic-based systems for the remote base stations. "International journal of hydrogen energy", 2013, vol. 38, núm. 1, p. 417-425.
URIhttp://hdl.handle.net/2117/17484
DOI10.1016/j.ijhydene.2012.09.123
ISSN0360-3199
Publisher versionhttp://www.sciencedirect.com/science/article/pii/S0360319912021891