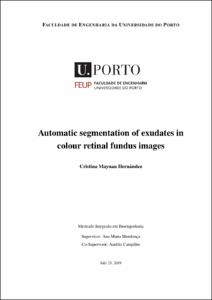 CovenanteeUniversidade do Porto
Document typeMaster thesis
Rights accessOpen Access
Abstract
This work aims at the development of an algorithm that allows the automatic detection of exudates in retinal fundus images. The detection of exudates allows diabetic retinopathy (DR) to be diagnosed, consequently it is an important task for the control and the treatment of people suffering DR. In addition, an increase of 35\% of people suffering from diabetes is predicted and, therefore, of people who will suffer from DR in the coming years. As a result, an important burden for ophthalmologists will be expected. For all this, it's highly needed the development of an automatic system for the detection of exudates. Two different algorithms are proposed. Background subtraction to deal with uneven illumination and mathematical morphology operators are used for exudate location. Finally, dynamic thresholding is applied for exudate segmentation. In the first algorithm dynamic thresholding is combined with the Kirsch edge detector. In the second one, a template and morphological operators are used to differentiate bright elements from exudates is used. The methods have been validated in three public datasets named e-ophta-EX, HEI-MED and DiaretDB1. The first two datasets have been used to validated the algorithms both at lesion level and image-level. However, DiaretDB1 was only used to validate the algorithms at image-level due to its ground truth does not mark exact boundaries of exudates. The results for the image-level validation are better for the second algorithm obtaining an AUC of 0.84, 0.75 and 0.84 for e-ophta-EX, HEI-MED and DiaretDB1, respectively. The results obtained with the evaluation at lesion-level are the same for the two methods and are quantified in terms of sensitivity and PPV. We have achieved values of sensitivity and PPV of 0.54 and 0.52, respectively, in e-ophta-EX and, 0.52 and 0.52, respectively, in HEI-MED for method 1. For method 2, we have obtained values for sensitivity and PPV of 0.5 and 0.57, respectively, for e-ophta-EX and 0.42 and 0.76, respectively, for HEI-MED.
SubjectsReina -- Diseases, Diagnostic imaging, Retina -- Malalties, Imatgeria per al diagnòstic
URIhttp://hdl.handle.net/2117/174823
Collections
Share: