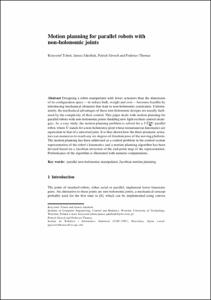 Document typeConference report
Rights accessOpen Access
Abstract
Designing a robot manipulator with fewer actuators than the dimension of its configuration space —to reduce bulk, weight and cost— becomes feasible by introducing mechanical elements that lead to non-holonomic constraints. Unfortunately, the mechanical advantages of these non-holonomic designs are usually darkened by the complexity of their control. This paper deals with motion planning for parallel robots with non-holonomic joints shedding new light on their control strategies. As a case study, the motion planning problem is solved for a 3-˘UPU parallel robot,where ˘U stands for a non-holonomic joint whose instantaneous kinematics are equivalent to that of a universal joint. It is thus shown how the three prismatic actuators can maneuver to reach any six-degree-of-freedompose of the moving platform. The motion planning has been addressed as a control problem in the control system representation of the robot’s kinematics and a motion planning algorithm has been devised based on a Jacobian inversion of the end-point map of the representation. Performance of the algorithm is illustrated with numeric computations.
CitationTchon, K. [et al.]. Motion planning for parallel robots with non-holonomic joints. A: International Symposium on Advances in Robot Kinematics. "13th International Symposium on Advances in Robot Kinematics". Innsbruck: 2012, p. 115-122.
URIhttp://hdl.handle.net/2117/17475
DOI10.1007/978-94-007-4620-6_15
Collections
Share: