Adherence to reporting guidelines increases the number of citations: the argument for including a methodologist in the editorial process and peer-review 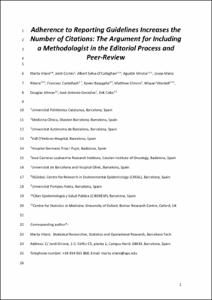 Document typeArticle
Rights accessOpen Access
European Commission's projectMIROR - Methods in Research on Research (EC-H2020-676207)
Abstract
From 2005 to 2010, we conducted 2 randomized studies on a journal (Medicina Clínica), where we took manuscripts received for publication and randomly assigned them to either the standard editorial process or to additional processes. Both studies were based on the use of methodological reviewers and reporting guidelines (RG). Those interventions slightly improved the items reported on the Manuscript Quality Assessment Instrument (MQAI), which assesses the quality of the research report. However, masked evaluators were able to guess the allocated group in 62% (56/90) of the papers, thus presenting a risk of detection bias. In this post-hoc study, we analyse whether those interventions that were originally designed for improving the completeness of manuscript reporting may have had an effect on the number of citations, which is the measured outcome that we used.
CitationVilaró, M. [et al.]. Adherence to reporting guidelines increases the number of citations: the argument for including a methodologist in the editorial process and peer-review. "BMC medical research methodology", 31 Maig 2019, vol. 112, núm. 19, p. 1-7.
URIhttp://hdl.handle.net/2117/174748
DOI10.1186/s12874-019-0746-4
ISSN1471-2288
Publisher versionhttps://bmcmedresmethodol.biomedcentral.com/articles/10.1186/s12874-019-0746-4
Collections
Share: