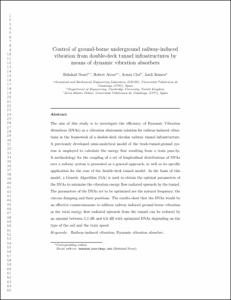 Document typeArticle
Rights accessOpen Access
ProjectSOLUCIONES INNOVADORAS PARA EL AISLAMIENTO DE EDIFICIOS A LAS VIBRACIONES PRODUCIDAS POR INFRAESTRUCTURAS FERROVIARIAS SOTERRADAS (MINECO-TRA2014-52718-R)
Abstract
The aim of this study is to investigate the efficiency of Dynamic Vibration Absorbers (DVAs) as a vibration abatement solution for railway-induced vibrations in the framework of a doubledeck circular railway tunnel infrastructure. A previously developed semi-analytical model of the track-tunnel-ground system is employed to calculate the energy flow resulting from a train pass-by. A methodology for the coupling of a set of longitudinal distributions of DVAs over a railway system is presented as a general approach, as well as its specific application for the case of the double-deck tunnel model. In the basis of this model, a Genetic Algorithm (GA) is used to obtain the optimal parameters of the DVAs to minimize the vibration energy flow radiated upwards by the tunnel. The parameters of the DVAs set to be optimized are the natural frequency, the viscous damping and their positions. The results show that the DVAs would be an effective countermeasure to address railway induced ground-borne vibration as the total energy flowradiated upwards fromthe tunnel can be reduced by an amount between 5.3 dB and 6.6 dB with optimized DVAs depending on the type of the soil and the train speed
CitationNoori, B. [et al.]. Control of ground-borne underground railway-induced vibration from double-deck tunnel infrastructures by means of dynamic vibration absorbers. "Journal of sound and vibration", 23 Agost 2019, vol. 461, p. 114914:1-114914:20.
URIhttp://hdl.handle.net/2117/174712
DOI10.1016/j.jsv.2019.114914
ISSN0022-460X
Publisher versionhttps://www.sciencedirect.com/science/article/pii/S0022460X19304766
Collections
Share: