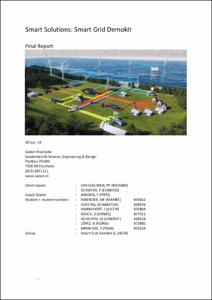 Show full item record
Rijkeboer, Maaike F.
Dijkstra, Martijn
Markvoort, Justin
Sonck, Daniël
Scholten, Vincent S.
López Lorenzo, Núria
Brinkhuis, Thijs
Tutor / directorJanssen, Frits
CovenanteeSaxion University of Applied Sciences
Document typeBachelor thesis
Rights accessOpen Access
Abstract
The purpose of this report is to justify the design choices of the smart grid demo kit. Something had to be designed to make a smart grid clear for people who have little knowledge about smart grids. The product had to be appealing and clear for people to understand. And eventually should be usable, for example, on an information market. The first part of the research consisted of looking how to shape the whole system. How the 'tiles' had to look to be interactive for users and what they should feature. One part of this was doing research to get to know more about the already existing knowledge amount users. Another research investigated what appeals the most to the users. After this, a concept was created in compliance with the group and the client. The concept consists of hexagonal tiles, each with a different function: houses, solar panels, wind turbines, factories and energy storages. These tiles are all different parts of a smart grid. When combining these tiles, it can be made clear to users how smart grids work. The tiles are fabricated using a combination of 3D printing and laser cutting. The tiles have laser cut symbols on top of them to show what part of the smart grid they are. Digital LED strips are on top of the tiles to show the direction of the energy flow, and the colors indicate if the tile is producing or consuming power from the grid. The tiles are connected to each other by the so called “grid blocks”. These blocks make up the central power grid and are also lighting up by LED strips. Each tile is equipped with a microcontroller which controls the LED strips and makes it possible for the different tiles to “talk” with each other. Using this, the central tile knows which tiles are connected to the system. The central tile controls all tiles and runs the simulation of the smart grid. For further development of the project, it can be investigated how to control and adjust the system from an external system, for example by a tablet. The final product consists of five tiles connected by seven grid blocks which show how a smart grid works.
Description
Treball desenvolupat dins el marc del programa 'European Project Semester'.
SubjectsElectric power systems, Smart power grids, Sistemes de distribució d'energia elèctrica, Xarxes elèctriques intel·ligents
DegreeGRAU EN ENGINYERIA DE DISSENY INDUSTRIAL I DESENVOLUPAMENT DEL PRODUCTE (Pla 2009)
URIhttp://hdl.handle.net/2117/174684
Collections
Share: