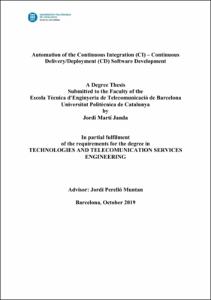 In traditional software development, where teams of developers worked on the same project in isolation, often led to problems integrating the resulting code. Due to this isolation, the project was not deliverable until the integration of all its parts, which was tedious and generated errors. The Continuous Integration (CI ) emerged as a practice to solve the problems of traditional methodology, with the aim of improving the quality of the code. This thesis sets out what is it and how Continuous Integration is achieved, the principles that makes it as effective as possible and the processes that follow as a consequence, to thus introduce the context of its objective: the creation of a system that automates the start-up and set-up of an environment to be able to apply the methodology of continuous integration.

Continuous Integration (CI) is a practice in software development where developers periodically merge code changes in a central shared repository, after which automatic versions and tests are executed. CI entails an automation component (the target of this project) and a cultural one, as developers have to learn to integrate code periodically. The main goal of CI is to reduce the time to feedback over the software integration process, allowing to locate and fix bugs more easily and quickly, thus enhancing it quality while reducing the time to validate and publish new so
SubjectsSoftware engineering, Automation, Enginyeria de programari, Automatització
URIhttp://hdl.handle.net/2117/174561