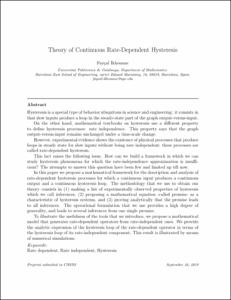 Except where otherwise noted, content on this work is licensed under a Creative Commons license : Attribution-NonCommercial-NoDerivs 3.0 Spain
Abstract
Hysteresis is a special type of behavior ubiquitous in science and engineering: it consists in that slow inputs produce a loop in the steady-state part of the graph output-versus-input. On the other hand, mathematical textbooks on hysteresis use a different property to define hysteresis processes: rate independence. This property says that the graph output-versus-input remains unchanged under a time-scale change. However, experimental evidence shows the existence of physical processes that produce loops in steady state for slow inputs without being rate independent: these processes are called rate-dependent hysteresis. This fact raises the following issue. How can we build a framework in which we can study hysteresis phenomena for which the rate-independence approximation is insufficient? The attempts to answer this question have been few and limited up till now. In this paper we propose a mathematical framework for the description and analysis of rate-dependent hysteresis processes for which a continuous input produces a continuous output and a continuous hysteresis loop. The methodology that we use to obtain our theory consists in (1) making a list of experimentally observed properties of hysteresis which we call inferences, (2) proposing a mathematical equation -called premise- as a characteristic of hysteresis systems, and (3) proving analytically that the premise leads to all inferences. The operational formulation that we use provides a high degree of generality, and leads to several inferences from one single premise. To illustrate the usefulness of the tools that we introduce, we propose a mathematical model that generates rate-dependent operators from rate-independent ones. We provide the analytic expression of the hysteresis loop of the rate-dependent operator in terms of the hysteresis loop of its rate-independent component. This result is illustrated by means of numerical simulations.
CitationIkhouane, F. Theory of continuous rate-dependent hysteresis. "Communications in nonlinear science and numerical simulation", 1 Gener 2020, vol. 80, p. 1-21.
URIhttp://hdl.handle.net/2117/174504
DOI10.1016/j.cnsns.2019.104970
ISSN1007-5704
Publisher versionhttps://www.sciencedirect.com/science/article/pii/S1007570419302898
Collections
Share: