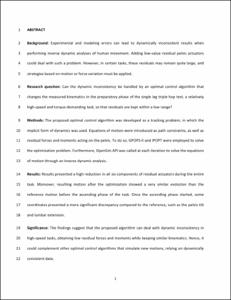 Except where otherwise noted, content on this work is licensed under a Creative Commons license : Attribution-NonCommercial-NoDerivs 3.0 Spain
Abstract
Background Experimental and modeling errors can lead to dynamically inconsistent results when performing inverse dynamic analyses of human movement. Adding low-value residual pelvis actuators could deal with such a problem. However, in certain tasks, these residuals may remain quite large, and strategies based on motion or force variation must be applied. Research question Can the dynamic inconsistency be handled by an optimal control algorithm that changes the measured kinematics in the preparatory phase of the single leg triple hop test, a relatively high-speed and torque-demanding task, so that residuals are kept within a low range? Methods The proposed optimal control algorithm was developed as a tracking problem, in which the implicit form of dynamics was used. Equations of motion were introduced as path constraints, as well as residual forces and moments acting on the pelvis. To do so, GPOPS-II and IPOPT were employed to solve the optimization problem. Furthermore, OpenSim API was called at each iteration to solve the equations of motion through an inverse dynamic analysis. Results Results presented a high reduction in all six components of residual actuators during the entire task. Moreover, resulting motion after the optimization showed a very similar evolution than the reference motion before the ascending phase of the task. Once the ascending phase started, some coordinates presented a more significant discrepancy compared to the reference, such as the pelvis tilt and lumbar extension. Significance The findings suggest that the proposed algorithm can deal with dynamic inconsistency in high-speed tasks, obtaining low residual forces and moments while keeping similar kinematics. Hence, it could complement other optimal control algorithms that simulate new motions, relying on dynamically consistent data.
CitationPallarès-López, R. [et al.]. Assessment of residual reduction procedures for high-speed tasks. "Gait and posture", 1 Setembre 2019, vol. 73, núm. September, p. 116-119.
URIhttp://hdl.handle.net/2117/174487
DOI10.1016/j.gaitpost.2019.07.191
ISSN0966-6362
Publisher versionhttps://www.sciencedirect.com/science/article/abs/pii/S0966636219301262
Collections
Share: