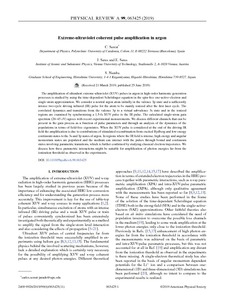 The amplification of ultrashort extreme-ultraviolet (XUV) pulses in argon in high-order harmonic generation processes is studied by using the time-dependent Schrödinger equation in the spin-free one-active-electron and single-atom approximation. We consider a neutral argon atom initially in the valence 3p state and a sufficiently intense two-cycle driving infrared (IR) pulse for the atom to be mainly ionized after the first laser cycle. The correlated dynamics and transitions from the valence 3p to a virtual subvalence 3s state and in the ionized regions are examined by synchronizing a 1.5-fs XUV pulse to the IR pulse. The calculated single-atom gain spectrum (26–45 eV) agrees with recent experimental measurements. We discuss different channels that can be present in the gain process as a function of pulse parameters and through an analysis of the dynamics of the populations in terms of field-free eigenstates. When the XUV pulse is considered at the end of the driving IR field the amplification is due to contributions of stimulated recombination from excited Rydberg and low energy continuum states to the 3s and 3p states of argon. In regions where the IR field is intense, high energy and angular momentum states are populated and the medium can interact with the pulses through bound and continuum states involving parametric transitions, which is further confirmed by studying classical electron trajectories. We discuss how these parametric interactions might be suitable for amplification of photon energies far from the ionization threshold as observed in the experiments.
CitationSerrat, C. [et al.]. Extreme-ultraviolet coherent pulse amplification in argon. "Physical Review A - Atomic, Molecular, and Optical Physics", 25 Juny 2019, vol. 99, núm. 6, p. 063425:1-063425:11.
URIhttp://hdl.handle.net/2117/174403
DOI10.1103/PhysRevA.99.063425
ISSN1094-1622
Publisher versionhttps://link.aps.org/doi/10.1103/PhysRevA.99.063425