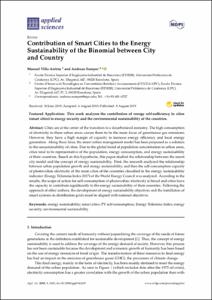 Document typeArticle
PublisherMultidisciplinary Digital Publishing Institute
Rights accessOpen Access
Abstract
Cities are at the center of the transition to a decarbonized economy. The high consumption of electricity in these urban areas causes them to be the main focus of greenhouse gas emissions. However, they have a high margin of capacity to increase energy e ciency and local energy generation. Along these lines, the smart urban management model has been proposed as a solution to the unsustainability of cities. Due to the global trend of population concentration in urban areas, cities tend to be representative of the population, energy consumption, and energy sustainability of their countries. Based on this hypothesis, this paper studied the relationship between the smart city model and the concept of energy sustainability. First, the research analyzed the relationship between urban population growth and energy sustainability; and then the self-consumption capacity of photovoltaic electricity of the main cities of the countries classified in the energy sustainability indicator (Energy Trilemma Index 2017) of theWorld Energy Council was analyzed. According to the results, the scope of action for self-consumption of photovoltaic electricity is broad and cities have the capacity to contribute significantly to the energy sustainability of their countries. Following the approach of other authors, the development of energy sustainability objectives and the installation of smart systems in distribution grids must be aligned with national objectives.
CitationVilla, M.; Sumper, A. Contribution of smart cities to the energy sustainability of the binomial between city and country. "Applied sciences", 1 Agost 2019, vol. 9, núm. 16, p. 3247:1-3247:21.
URIhttp://hdl.handle.net/2117/174364
DOI10.3390/app9163247
ISSN2076-3417
Publisher versionhttps://www.mdpi.com/2076-3417/9/16/3247
Collections
Share: