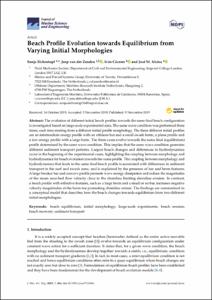 Except where otherwise noted, content on this work is licensed under a Creative Commons license : Attribution 3.0 Spain
ProjectHYDRALAB-PLUS - HYDRALAB+ Adapting to climate change (EC-H2020-654110)
Abstract
The evolution of different initial beach profiles towards the same final beach configuration is investigated based on large-scale experimental data. The same wave condition was performed three times, each time starting from a different initial profile morphology. The three different initial profiles are an intermediate energy profile with an offshore bar and a small swash berm, a plane profile and a low energy profile with a large berm. The three cases evolve towards the same final (equilibrium) profile determined by the same wave condition. This implies that the same wave condition generates different sediment transport patterns. Largest beach changes and differences in hydrodynamics occur in the beginning of the experimental cases, highlighting the coupling between morphology and hydrodynamics for beach evolution towards the same profile. The coupling between morphology and hydrodynamics that leads to the same final beach profile is associated with differences in sediment transport in the surf and swash zone, and is explained by the presence of bar and berm features. A large breaker bar and concave profile promote wave energy dissipation and reduce the magnitudes of the mean near-bed flow velocity close to the shoreline limiting shoreline erosion. In contrast, a beach profile with reflective features, such as a large berm and a small or no bar, increases negative velocity magnitudes at the berm toe promoting shoreline retreat. The findings are summarised in a conceptual model that describes how the beach changes towards equilibrium from two different initial morphologies.
CitationEichentopf, S. [et al.]. Beach profile evolution towards equilibrium from varying initial morphologies. "Journal of marine science and engineering", Novembre 2019, vol. 7, núm. 11, p. 406:1-406:20.
URIhttp://hdl.handle.net/2117/174283
DOI10.3390/jmse7110406
ISSN2077-1312
Publisher versionhttps://www.mdpi.com/2077-1312/7/11/406
Collections
Share: