Seismic damage scenarios in the municipalities of Elche and Alicante (Spain). A first step to the emergency planning 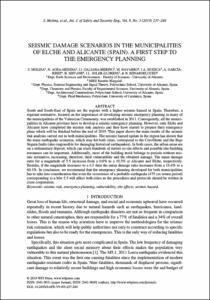 Except where otherwise noted, content on this work is licensed under a Creative Commons license : Attribution-NonCommercial-NoDerivs 3.0 Spain
Abstract
South and South-East of Spain are the regions with a higher seismic hazard in Spain. Therefore, a regional normative, focused on the importance of developing seismic emergency planning in many of the municipalities of the Valencian community, was established in 2011. consequently, all the municipalities in Alicante province have to develop a seismic emergency planning. however, only Elche and Alicante have completed the seismic risk analysis and they have started to prepare their emergency plans which will be finished before the end of 2019. This paper shows the main results of the seismic risk analysis carried out in both municipalities. The seismic hazard update in the region has shown that the main earthquake scenarios, which may hit both cities, correspond to the crevillente and the Bajo Segura faults (also responsible for damaging historical earthquakes). In both cases, the urban areas are on a sedimentary deposit, which can reach hundreds of meters so site effects and possible site-building resonance can be important. Additionally, most of the building stock belongs to periods without seis- mic normative, increasing, therefore, their vulnerability and the obtained damage. The mean damage ratio for a magnitude of 5.5 increases from a 0.8% to a 10.3% at Alicante and Elche, respectively. Besides, if the magnitude increases to a 6.5 then the mean damage ratio increases from a 16.6% to a 60.3%. In conclusion, we recommend that the emergency planning developed for both municipalities has to take into consideration that even the occurrence of a probable earthquake (475 yrs return period) corresponding to a mw 5.5 will affect both cities so the procedures and protocols should be written in close cooperation.
Location
1: Carrer Asunción Parreño García, 46, 03205 Elx, Alicante, Espanya
2: Alicante-Luceros, 03003 Alicante (Alacant), Alicante, Espanya
CitationMolina, S. [et al.]. Seismic damage scenarios in the municipalities of Elche and Alicante (Spain). A first step to the emergency planning. "International Journal of Safety and Security Engineering", 1 Gener 2019, vol. 9, núm. 3, p. 237-248.
URIhttp://hdl.handle.net/2117/174204
DOI10.2495/SAFE-V9-N3-237-248
ISSN2041-904X
Publisher versionhttps://www.witpress.com/elibrary/sse-volumes/9/3/2496
Collections
Share: